On Sunday, August 26, the Atlanta Jewish Film Festival was delighted to present as part of AJFF Connects, and in partnership with the Ismaili Council for the Southeastern United States, an encore presentation of Shalom Bollywood: The Untold Story of Indian Cinema, celebrating the unique cross-section of cultures that informed the development of Indian cinema, at the Ismaili Jamatkhana in Norcross.

With over 125 in attendance, members of different faiths enjoyed delicious traditional bites, including hummus, pita, sweets, and chai tea, with lively conversation before the film, while tours of the Ismaili Jamatkhana, a place of congregational worship for Shia Ismaili Muslims, took place. Munir Meghjani, leader and connector within the Ismaili community, and AJFF Board Member Rabbi Brad Levenberg highlighted the partnership between AJFF and the Muslim community before introducing the film.

Shalom Bollywood was followed by a Bollywood dance performance by DanceFlix Academy. Audience members were also invited to participate in an impromptu dance lesson from the Academy’s director, Anusha Hussaini. 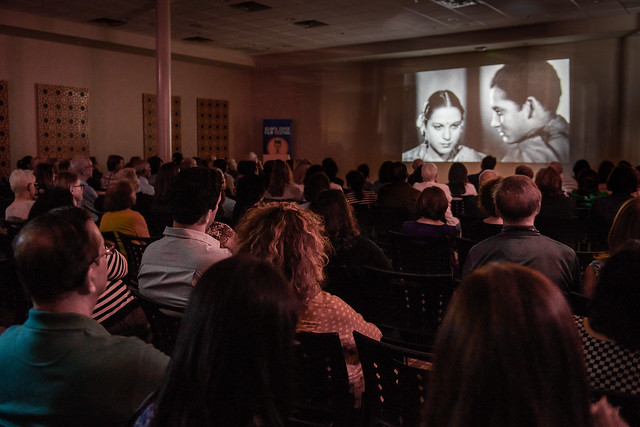 More to See at AJFF

Tickets go on sale to the public beginning Monday, January 27 at 10:00 AM EST.

To purchase tickets online, simply navigate to the various film(s) you wish to order, select the desired screening, add to your cart, and then click to either “Continue Shopping” or “Proceed to Checkout.”

If you are a Member or Sponsor, be sure to login with your account at AJFF.org/login to redeem your benefits and reserve your tickets.

“Standby Only” means tickets are currently unavailable for a specific screening. However, we encourage you to periodically check the website or inquire with the Box Office at 678-701-6104. Additional tickets may become available.

If you are unable to secure tickets to the desired screening in advance, try the standby list. Those wishing to add their name to the standby list can do so in person, on the day of the screening at the theater venue. No email or phone requests will be accepted. Unoccupied seats will be released at show time, as available.